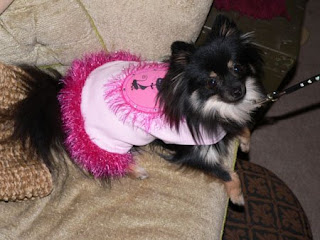 HEY POODLE!™ , This is our first
posting to the Hey Poodle Girls
blog and we thought that we would
start by introducing some of the real
life characters. First, this tiny
cutie is LIL' SHIMMEY MARIE one
Madison's dogs. But, in real life
she's one of my official studio pets
and one of the little loves of my life! 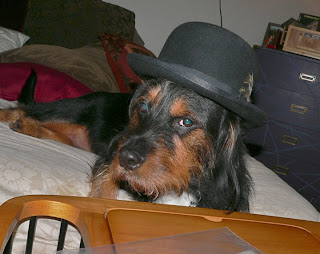 Madison's other dog is DUNKIN JAY a small
terrier mix she found wondering the streets
outside of her upscale clothing boutique.
In real life my husband (John) and I adopted Dunkin from the local dog shelter in Orlando Florida. When we first got him we thought that he was going to stay around 15 lbs. Well, as you can see from his photo he has exploded to 55lbs.
He has turned into a hairy gorilla who can be
quite the handful somtimes, but we absolutely
love him! :) 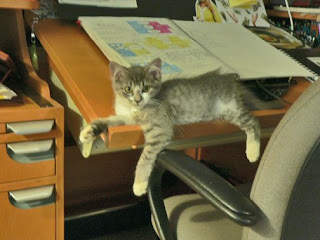 Now this little fluff ball is Sunny's little cat ZEN.
Sunny use to have a yellow lab named Ray but it seemed more fitting that she has a cat named Zen since she's into yoga. But in my world this is little ZEN FAY, a little kitten my husband and I rescued off the streets when she was about 8-12 weeks old. It took us a month to catch her. Every night we would go to the office building she was hanging out at and leave her fresh water and a can of soft cat food. We couldn't get any where near her because she was to afraid of people. She got to know the sound of our Jeep so well that she would come running when she heard us drive up. Finally the last night she hid way at the top of a huge bush and just cried and cried, she was so hungry and scared and didn't know what to do. My husband reached in with gigantic leather gloves on and pulled her out, and she didn't resist much at all. When we got her home she was nothing but skin and bones and a belly full of worms. She's all better now and an absolute sweet heart. Every night she's a little snuggle bunny who curls up with us in bed. She' my little studio helper who likes to steal everything from my desk and hide it around the house. We named her Zen because she has such a calming affect on John and I. Her middle name is Fay because we rescued her a week before hurricane Fay blew through Florida. Zen Fay. We were so glad to have rescued her before the hurricane because there would have been no way that she would have survived, she was much to weak. My husband was also glad because he knew I would drag him out into that horrible weather to try and catch her. :) Our little Zen Fay!